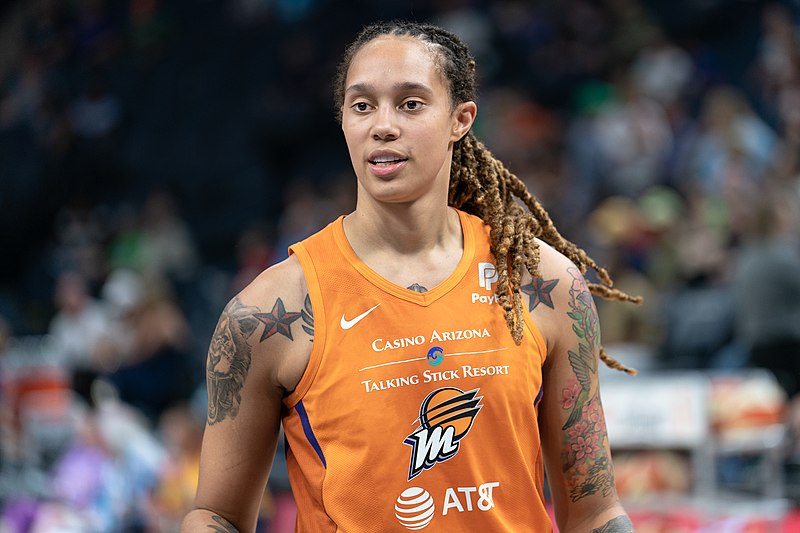 Brittney Griner is seen playing for the WNBA’s Phoenix Mercury in 2019. Grainer pleaded guilty on July 7 on charges of possession and carrying cannabis oil into Russia. On Thursday, August 4 she was sentenced to 9 years in prison by Russia. PHOTO CREDIT: LORIE SHAULL/WIKI COMMONS

“Our requests for access are consistently delayed or denied, and we will continue to press for fair and transparent treatment for all U.S. citizen detainees in Russia.”

Four-and-a-half months after her arrest at Moscow’s Sheremetyevo Airport on allegations of attempted drug smuggling, WNBA player Brittney Griner’s trial will begin Friday in Russia. Griner has been imprisoned in Russia since February, facing charges she carried a “significant amount” of cannabis oil vapes in her luggage.

Griner, 31, appeared impassive wearing handcuffs and a red hoodie at her pretrial hearing on Monday in Khimki, Russia. Neither Griner nor her Russian lawyer made a statement to the press, reported UPI.  At the hearing, after setting the trial date, a Russian judge extended Griner’s incarceration for a third time since February. The Phoenix Mercury star could remain behind bars for another six months during her trial.

Griner was returning to Russia just a week after Russia invaded the Ukraine. The two-time Olympic gold medalist plays in Russia for the UMMC Ekaterinburg basketball team during her off-season with the Phoenix Mercury. It’s not uncommon for women basketball players to join teams overseas during the off-season, as they earn substantially less than their male counterparts in the NBA.

The timing of her arrest has many positing that Griner’s extended detention — and Russia’s indifferent response to her case — could signal Russian authorities see Griner as a potential political pawn. Due to Russia’s classification of cannabis extracts, Griner could face 10 years in prison on the serious charge of narcotics smuggling.  Fewer than 1% of defendants in Russian criminal cases are acquitted, and unlike in the U.S., acquittals can be overturned, according the the Associated Press.

Conviction before freedom
However, if Griner is convicted, that could open the door to a prisoner exchange for her freedom — a possibility given the high-profile nature of her case. However, any swap would first require Griner to first be convicted and sentenced, then apply for a presidential pardon, according Maria Yarmush, a lawyer specializing in international civil affairs, told Kremlin-funded TV Channel RT.

In April, U.S. Marine veteran Trevor Reed was exchanged for Konstantin Yaroshenko, a Russian citizen serving 20 years in U.S. prison for planning to smuggle than $100 million worth of cocaine into the U.S.  Reed served three years of a nine- years sentence for attacking a Russian policeman while intoxicated — an allegation he denies, according to NPR.

The likelihood of a prisoner exchange could be also bolstered by the State Department in April reclassifying Griner as being “wrongfully detained.” That step up in classification saw the U.S. Special Presidential Envoy for Hostage Affairs, Roger Carstens, assigned to Griner’s case.  But  progress has been stonewalled by Russian authorities and access to the detained basketball star denied.

“Our requests for access are consistently delayed or denied, and we will continue to press for fair and transparent treatment for all U.S. citizen detainees in Russia, ” Jalina Porter,  principal deputy spokesperson with the State Department, said in May about Griner’s plight.

Advertisement
Related Topics:Latest News Top
click to Comment(Comment)
Up Next

What the Market Will Bear: Stocks Sink, Cannabis Ventures See the Lowest Total Funding Since 2017

Cannabis Last Week with Jon Purow interviews Peter Su of Green Check Verified. Peter Su is a Senior Vice President with Green Check Verified, the top cannabis banking compliance software/consultancy in the space. A 20+ year veteran of the banking industry, Peter serves on the Banking & Financial Services committee of the National Cannabis Industry Association. He chairs the Banking and Financial Services Committee for the NYCCIA & HVCIA. He is an official member of the Rolling Stone Cannabis Culture Council. And, he is on the board of the Asian Cannabis Roundtable, serving as treasurer.

After Highs and Lows, Missouri Adult-Use Will Be on Ballot!

After Highs and Lows, Missouri Adult-Use Will Be on Ballot!